If you’re worried about how inflation will affect your spending, you can take a deep breath for another month because April’s retail sales numbers were strong. The headline number for April print retail sales was 0.9 percent, which was lower than the expected 0.9 percent and higher than March’s 1.4 percent (which was revised up from 0.5 percent). This is the fourth month in a row that prices have gone up. Printing without autos beat expectations, coming in at 0.6 percent instead of the expected 0.4 percent and 2.1 percent in March, which was changed up from 1.1 percent. The strongest part of the data, though, was the Ex-Gas and Autos component, which was 1%, compared to 0.7% expected and 1.2 (up from -0.1%) in March. With the changes, the data is strong and there are no signs that US consumers are about to stop spending.

The US Dollar Index (DXY) struggled to trade through the 161.8 percent Fibonacci extension from April 28 highs to May 5 lows near 104.90 as bears entered the market and pushed the DXY Index lower over the past 3 days (including today). A low peak from 2002 at 105.41 is the next level of horizontal resistance above. The low from May 5 near 102.35 is the first point of support. Below that, there is horizontal support at the highs from April 19th, near 101.00, just ahead of the 50-day moving average at 100.71. 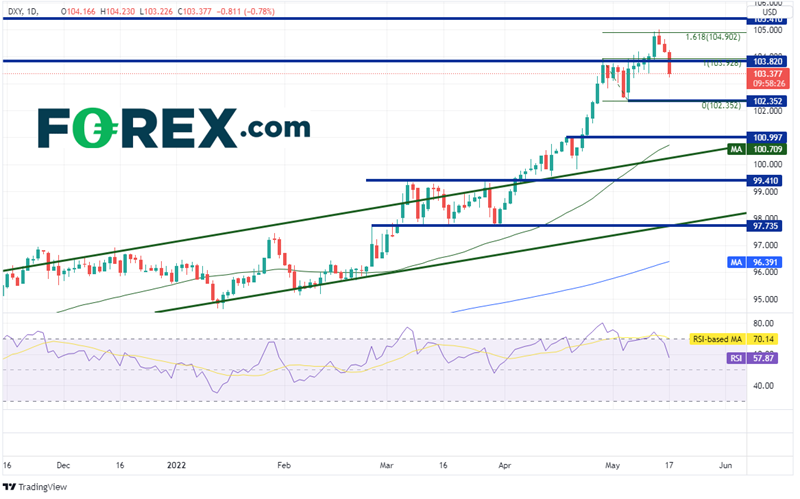 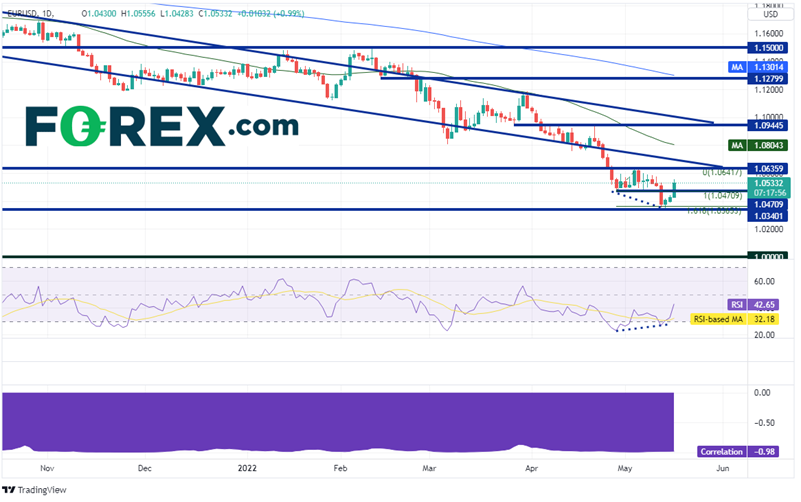 Tradingview and StoneX are sources.

Don’t ever think too little of an American consumer! Even though inflation was high in April, retail sales stayed strong. Is this just a correction to key levels for the DXY Index and the EUR/USD pair, or will they keep moving in their long-term trends? When Powell speaks later today, traders may find out more.