Home » Overview of Meta Results and Analysis of FB Stock

Overview of Meta Results and Analysis of FB Stock

Meta’s stock market value has dropped by almost $350 billion since it announced that user growth had stopped for the first time in its history. This was part of its latest set of disappointing results.

Meta is expected to announce its first-quarter results on Wednesday, April 27, 2022, after U.S. trading has ended.

Overview of Meta results for the first quarter of 2022

This earnings season will be a huge test for Big Tech as a whole, but Facebook owner Meta will face the biggest test.

Since its last earnings report in early February, when it reported its first quarterly drop in daily active users (DAUs), Meta shares have dropped more than 43 percent on the stock market. Both its earnings and its outlook have disappointed the markets. Because of this, its value has dropped from more than $880 billion at the beginning of February to less than $535 billion right now.

In the last three months of 2022, DAUs dropped from 1.93 billion in the previous quarter to 1.929 billion. This was the first time DAUs have ever gone down in a row. Wall Street thinks that in the first quarter, Meta’s DAUs will go back up to an average of 1.94 billion. That would be up about 3.4% from a year ago, but it would also be the slowest growth from one year to the next ever recorded.

We could see another sharp drop in the title if it doesn’t live up to expectations and if the number of users keeps going down. A surprise, on the other hand, could help people believe that the last quarter was just a fluke.

Meta said that revenue in the first quarter of 2022 would be between $27 billion and $29 billion, and Wall Street is expecting a figure of $28.2 billion. That would be more than the $26.2 billion that had been reported the year before. Analysts expect adjusted earnings per share (EPS) of $3.13, which is down from $3.30 a year ago. This is the second quarter in a row that annual earnings are expected to go down.

Meta warned that it will still be going against the wind at the beginning of 2022. First, engagement and impressions are both under pressure because TikTok, YouTube, and Snapchat are making it harder for Meta to get people’s time. Its decision to push its new, shorter video service, Reels, is also hurting revenue because Reels isn’t as profitable as Feed and Stories, which are its main features.

Apple made changes to privacy last year that made it harder for social media platforms to target ads and track people’s online behavior. These changes will continue to affect the company after they are put in place in the second half of 2021. This is happening at a time when Meta thinks advertiser demand will go down as companies adjust their budgets because of inflation and problems with the supply chain. So, it will be harder to make comparisons in the first half of 2022, since Apple’s big changes won’t have happened yet, and demand will be higher because the macro environment will be better.

He also said that the value of foreign currencies will be a problem. The markets believe there are other reasons to be careful before the results come out. People may be spending less time online when they go out to make up for lost time during the pandemic. This may have happened in markets that have reopened their economies.

But Meta’s ability to get more users and more money from advertisers isn’t the only thing that worries people. The company’s decision to change its name to Meta last year showed that it wanted to be the central platform for the metaverse. This gave the company a new long-term goal, but it also cut profits by a lot in the meantime. Its new Reality Labs division, which houses its virtual reality and metaverse businesses, had an operating loss of more than $10 billion in 2021. Wall Street predicts that it will have another big loss of $3.5 billion in the first quarter of 2022. Right now,

In a conference call with investors, CEO Mark Zuckerberg told them, “If last year was about putting a stake in the ground to figure out where we are going, this year will be about doing it.” followed the results from the last set.

The founder of Meta said that the company was working on improving its Facebook and Instagram social media platforms as well as its WhatsApp and Messenger messaging services by continuing to try out new tools and features to make money in areas like online shopping. and group talks at work. It also keeps rebuilding its advertising infrastructure to keep up with changes made by Apple and new government rules in Europe. Over the next few years, it will also do a big overhaul of its own privacy infrastructure.

AI is also a key investment area for its advertising-based and metaverse businesses. Meta will also need to keep investing in data centers and networking as it continues to grow.

In light of this, Meta said its budget for capital spending in 2022 is between $29.0 billion and $34.0 billion, and the total amount spent will be between $90.0 billion and $95.0 billion. This is more than the $71.2 billion spent in 2021, but Meta has already cut its original goal of $97.0 billion for spending in 2022. Investors will want to see proof that Meta is keeping costs under control so that this doesn’t hurt profits again.

Meta may have a hard time in the first half, but things should get better in the second half when it faces different comparisons. Meta had record sales in 2021, and Wall Street is expecting sales to grow by more than 11% from 2021 to 2022. But the markets think that every member of Big Tech will see their earnings growth slow down from Analysts expect the company’s adjusted earnings per share (EPS) to drop by 0.7% in 2022, which would be a big drop from last year’s record-breaking earnings.

What’s next in the stock market for FB stock?

Last week, Meta stock fell another 12% on the stock market, and on Friday it hit its lowest price in two years, $184.

Last week, the number of trades was more than 10% higher than the 30-day moving average. This suggests that the stock market’s current downward trend still has room to grow. On the downside, the next important target is the support level that turned into resistance in 2019: $173. The door to less than $160 could be opened by the slide below. 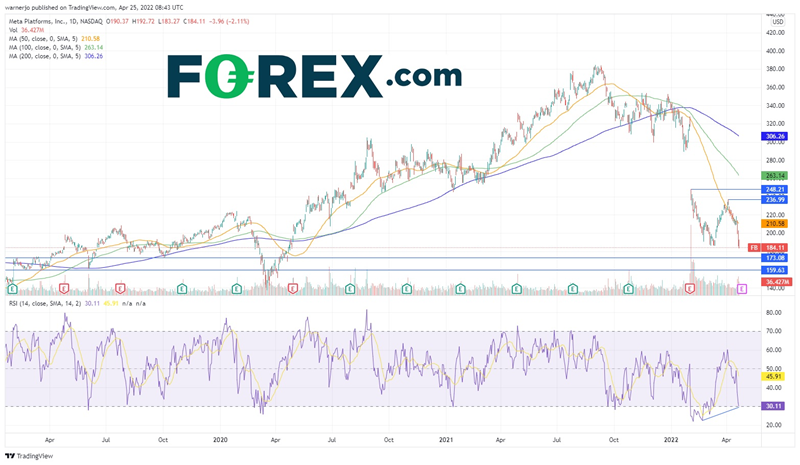 From Tradingview and Stone X

On the other hand, the RSI is about to enter oversold territory, and we’ve seen it break away from the price. The indicator is still above the lows seen in March, even though the shares hit new lows. Both of these things suggest that the current downward trend is about to end and that a move up could be coming.

The 50-day moving average SMA, which is currently at $211, has acted as a ceiling for the stock since it crashed after its last set of results. This is the first upside target that needs to be seen. taken back. Then, the March high of $237 could come into play before the post-results high of $248.

Notably, the 63 brokers who cover Meta think that the stock can reach all of these goals and that the 100-day and 200-day moving averages will rise to $315 over the next 12 months. This means that the stock price could go up by more than 72 percent from where it is now.