On Tuesday, April 26, after the markets close, Microsoft is expected to share its financial results for the third quarter of its fiscal year.

This week, the US earnings season is in full swing, and Big Tech is the most important company event. Alphabet and Microsoft are both due to report on the same day. Meta will then report on Wednesday, and Apple and Amazon will finish up on Thursday.

Big Tech companies’ stock prices are likely to be put to the test during earnings season, and the sector faces a lot of challenges.

Microsoft’s latest quarterly report showed that the company had a record year for revenue and profit. Sales of its cloud computing services, software, and range of hardware, from computers to game consoles, continued to grow at double-digit rates. It also had a positive outlook when it said that its “differentiated market position, customer demand for our high-value hybrid and cloud offerings, and consistent execution would drive another solid quarter of revenue growth” when it released its next set of results.

Wall Street thinks that Microsoft’s revenue will go up 18% year-over-year to $49.1 billion in the third quarter of its fiscal year and that its diluted EPS will go up by 12% to $2.19.

Importantly, Microsoft said that its outlook for this quarter did not include any help from the company it bought, Nuance Communications, which specializes in artificial intelligence. However, the deal was finalized in early March, so it will help the company’s results.

Intelligent Cloud, Microsoft’s main cloud computing division, is expected to continue to be the main driver of growth over the next few years, as businesses continue to digitize and move their operations online. Analysts think that the unit’s sales can grow by 25 percent from one year to the next, reaching $18.9 billion.

This growth will be about the same as last year’s, which shows that demand is still strong despite tough comparisons and that the cloud computing division is doing especially well. Even though the fundamentals are still strong, the markets think that this unit’s revenue growth will slow to less than 22% year-on-year for the first time since the start of fiscal 2020 in the last quarter of the current fiscal year.

Productivity and business processes, which include Microsoft’s Office software, Dynamics 365, and the social network LinkedIn, are expected to have slower revenue growth for the third quarter in a row. Analysts predict a 16.5% increase in revenue, to $15.8 billion, for the third consecutive quarter. People and businesses are tightening their budgets this year, and growth is expected to slow even more in the last quarter of the fiscal year. This makes some people worry that they will stop buying software and paid job search plans.

It’s important to note that when Microsoft finishes buying Activision Blizzard for $68.7 billion in fiscal year 2023, it will add a new element to its gaming network. This is assuming that the two companies can continue to clear a number of regulatory hurdles.

The hardware part of the business is the most vulnerable to future cuts in consumer spending because of the cost of living crisis. However, business demand is expected to do better, even if some customers put off plans to upgrade Windows, Office 365, or its server software products. This year, the cloud computing part should still be the most stable.

Since the beginning of 2022, big tech stocks have been under pressure on the stock market. Growth prospects look harder due to a number of headwinds.

Notably, Microsoft shares haven’t done as well as those of competitors and have dropped more this year than those of Alphabet, Apple, and Amazon. However, analysts think it may have the fastest earnings growth of any company this year. who are part of Big Tech.

What’s next on the stock market for MSFT shares?

Since the beginning of 2022, Microsoft shares have been going down on the stock market, with a series of lower highs and lower lows. However, the fact that the stock found a bottom at 280 $ that was higher than the last leg will build some trust.

The RSI is in “bearish” territory, and over the past 100 days, the number of trades has gone down. This suggests that the stock may continue to move between the 100-day moving average SMA’s initial upside target of $307 and the resistance level of $275, which has been hit three times this year. 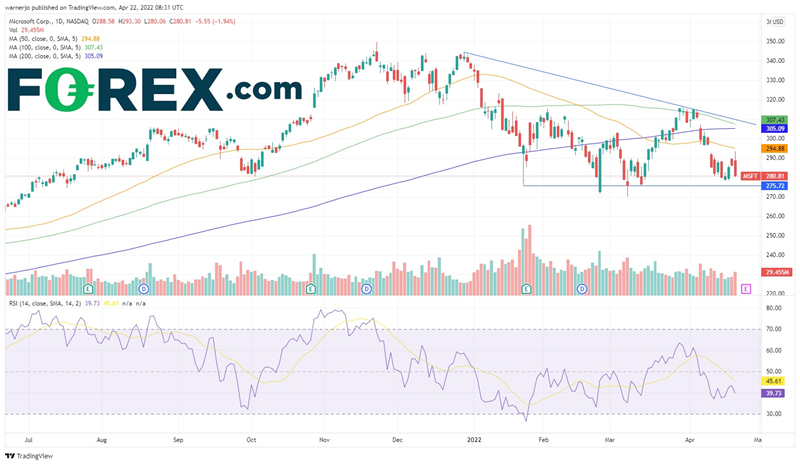 If MSFT’s stock price can quickly get back to the three moving averages, it can aim for a move above $315, which was the high point at the end of March, before thinking about a move towards the all-time highs seen in the stock market at the end of last year.